Hypothetically, you will pay this.

Hypothetically, you will pay this before you die. 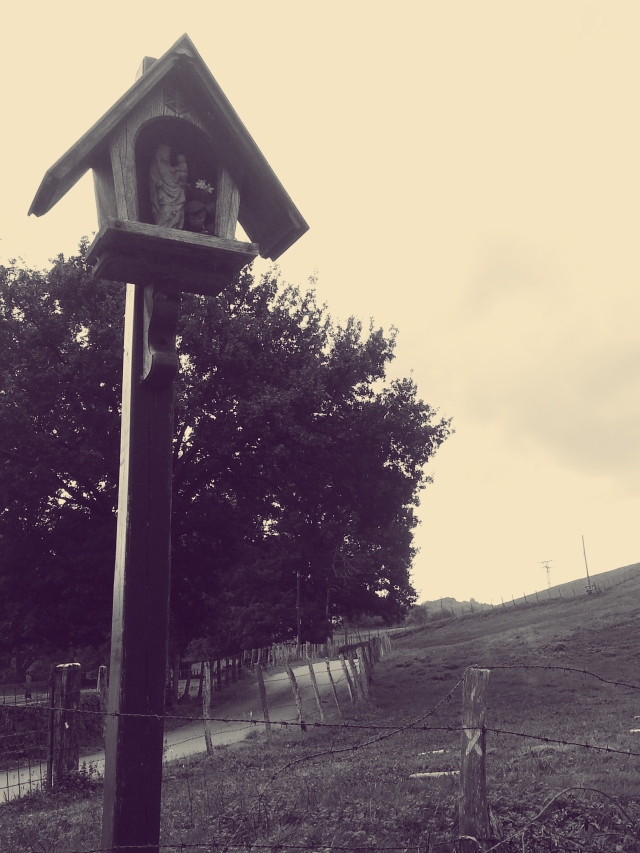 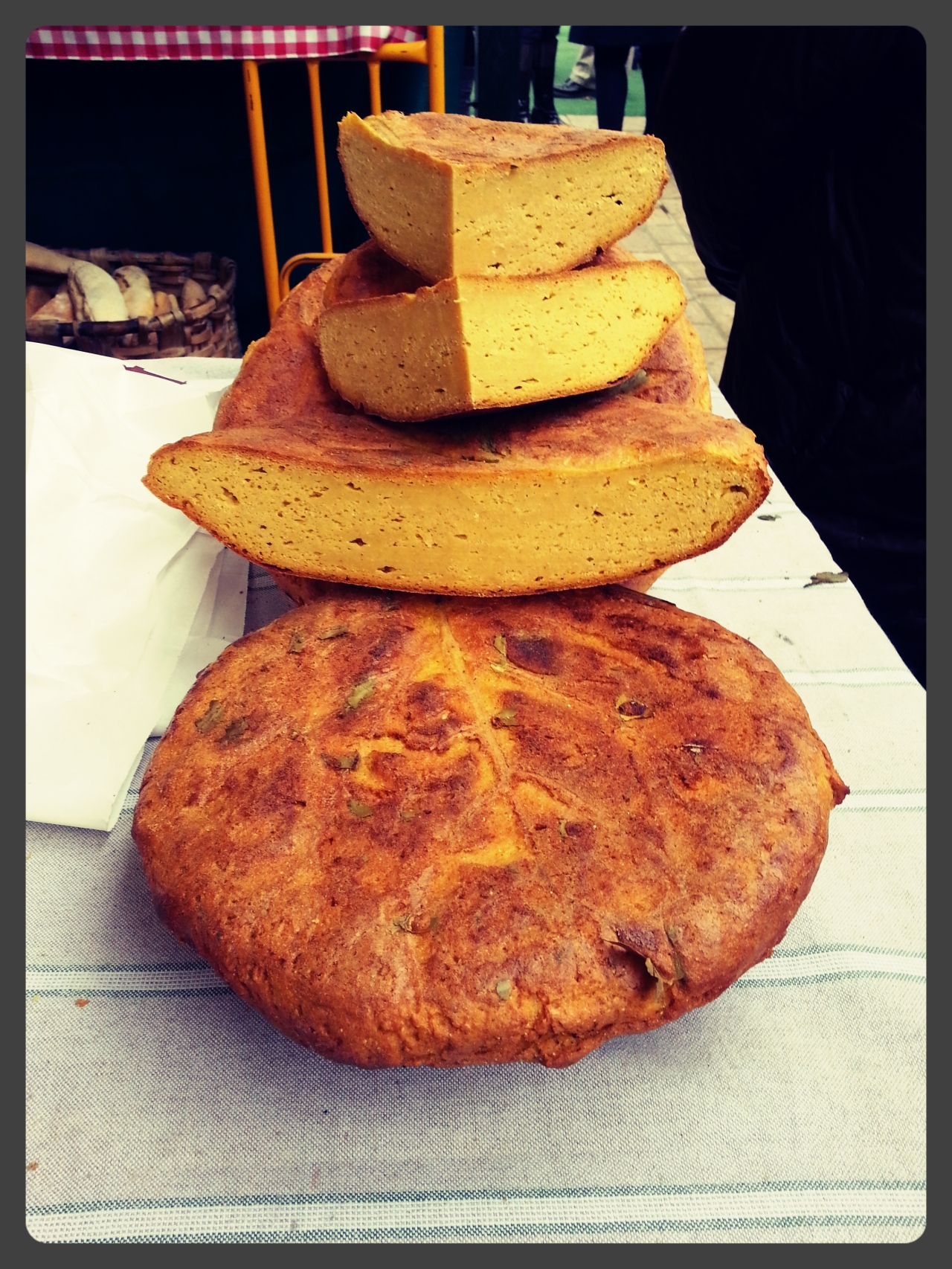 We bought us this day our daily bread, like most days.
And then on the other days we just buy a loaf of slices,
brand named Bimbo, for some others days to come.

A good corn isn’t hard to find.
Nor is cornbread.
It is a plant of dark green, those leaves,
fabled to be an
ancient grass writ large in the New World
doubling the size of the known world
carried here and eaten
with zest and confidence
that the Basques waited
before applying such consideration
and enthusiasm
to the potato*[fnote].               the things
we believe and wait to
fear even as we eat blood sausages
filled with rice or cardoon
soaking in it’s swamp of
those things humble
tried and true, the pig
manageable under
the recognizable, an awareness (if you must know, awareness+comfort = tradition)
of a particular beast
and the products we
can assume from it.

A good corn is not
hard to find, unless you are looking for it in
the sweetener in your soda or
cereal
unless you like it GMO’d
because this is the
EuroUnion of regulatory emancipation from worry
and that ≠ what you’d
consider a mercantile straitjacket or a  fare-thee-well state
unless you really need
that squeak only found in cornstarch to
complete a DNA sequence or
to iron a shirt or to
placate a toddler with said dust, water and food dye goop
or to
take an exception to
the rule and find it
in the pasta section, made into
spaghetti or paying
4 dollars americanos
for a ‘medium’ sized bag
of ‘mexican’
tortilla chips

(here ‘tortillas’ being the stuff of eggs
in the form of cakes, often holding potatoes together
and what you might call
by a most detestable term, ‘frittata’
– still, you can’t argue with
common usage)

There’s only one size bag.
So goes history
and corn abundant in
a flat fried bread here,
a ‘tortilla’ sure, locally known as ‘talo’
and paired often with
a thinner
chorizo known as chistorra… txorizo, txistorra…
Corn, welcome to not Kansas.
Spelling, welcome to not Spanish.

In his stellar and highly-recommended book, The Basque History of the World, Mark Kurlansky offers the follow observation: “An indication of the Basque regard for corn is the fact that rather than adopt a Castilian word, they gave the grain it’s own name in Euskera, arto.”

Arto, the Basque noun for ‘corn’, sounds just like harto, the Spanish adjective for ‘sick of/tired of something’.

A vestige, perhaps, of the high regard afforded to corn in the Basqueland, I often hear the same response when I compliment the particularly rich taste, color or texture of a meat, poultry, or egg: “Because the animal ate corn! And not just any old shit, it was fed corn!”

Corn is for me, now, a thing few and far between. I don’t have much of a chance to get sick of it. It does not take on 13 dozen different forms, somehow finding its way into everything from ice cream to balloons (factoid: cornstarch used to keep the inside from sticking to itself). And unless the thing sitting in front of you is actually cornbread, cornflakes, popcorn, corn on the cob, or canned corn, you’re probably not eating corn.

Kurlansky writes that, “even aftermost Europeans had given in and were eating potatoes, though still feeding corn only to pigs, the Basques were doing just the reverse. Basque do [read: did (in the past)] not seem to like any tubers. They feed turnips to pigs and seldom eat beets. In 1783, a Bayonne chemist wrote to Antoine-Augustin Parmentier, the French nutritionist who finally persuaded his country to eat potatoes, informing him that the Basques eat corn, not potatoes, and ‘no province produces healthier, more vigorous people.'”

Here, the corn-fed boys, and in my corner of the world, go to baseball camp and football practice. And those walking on 4 legs, to slaughter. Times change. Potato, potatoe. I can’t help but intuit that reversed trend with potatoes in the Basque country today. With no qualms whatsoever, they’re stuck on nearly every plate I’ve ordered out. However, I would say there still is a general look of mystification in the eyes of people learning that we grow and eat tubers like turnips and radish (and glares of disgust and abject terror when I extol the virtues of peanut butter).

Nowadays, little suspicion of the potato remains, especially considering the proliferation of the tortilla de patata. A dish so prized that many Basques considered it both a staple and a treat… and unsurprisingly (or not?) it fails to escape language and identity politics – elsewhere on the continent, this same egg-potato ‘cake’ is usually known as tortilla española.

In the past, “Europeans believed that the physical appearance of food indicated hidden properties…Walnuts enhanced intelligence because they resembled the brain. The potato, it was reasoned, caused leprosy,” notes Kurlansky.

The yolks of the eggs we buy from the little old countryfolk are an impenetrably deep mustard orange color, almost an ocher. You’re damn right those chickens eat corn. And those potatoes, from the southern Basque province of Alava-you bet-the best in Spain. The tortillas made from these two ingredients, can awaken the dead and overwhelm (in a good way) the living.

Honey, you know that The English don’t make no sense.
So don’t get all wide-eyed and lip-quivery when I can’t give you no decent reason.
Yeah, we say, “all they have to do is reach for the stars,” when we talk about one dude or gal. When, you know, you don’t know if it be one or the other, them is not many, them is him or her.
It’s probably got a proper name but I like the sound of ‘ambiguous third person singular.’

So, might you guess what they do in The Spanish? What you gotta say when you ‘think out loud’ or ‘talk to yourself?’:
Pensar para tus adentros.

Who here’s taken a Spanish class?
Por y para. As a substitute or surrogate.
Por y para. Vicariously. For the benefit of.
Por y para. For some saint’s sake, enough for now.
Infinitive verb in The Spanish, flicked into The English unkempt:
Pensar – To Think…To Wonder..
Pensar – Thinking, Wondering
Pensar – Think! Wonder! (Do it. Now.)

Pensar para tus adentros.
I know. What that conjures up is out of control. Am I alone or is that some hilarious pyscholinguistics with metaphysical undertones??? I mean, like, think about it.
Think to one’s selves.
Wonder in the direction of your inner ones.
Think towards those on the inside.
Wonder through the ones within.

I’m verklempt, just, oh gawd.
Please, I need a moment.
Here’s a topic to discuss amongst your selves.